One of the earliest, if not the earliest, dumping trucks was the Thornycroft Steam Dust Cart (pictured below) developed in 1896 and first used by Chiswick District Council in London, England.

The Thornycroft Company made steam trucks, but this tipper version was an adaption for dust cart purposes. The front cab included the boiler which provided 180 PSI pressure. Moving the machine was the twin cylinder compound engine (3″ + 6″ by 3″ stroke) which was mounted down low. The final drive chain is visible in the photo.

Although Messrs Thornycroft was responsible for the design and engineering, the bodywork (and maybe the chassis too) was made for them by the Bristol Wagon and Carriage Company. The dumpster itself would have to wait nearly forty years to be invented.

George Roby Dempster And The Invention Of The Dumpster

The word “dumpster”, first used commercially in 1936, came from the Dempster-Dumpster system of mechanically loading the contents of standardized containers onto garbage trucks. The patent was shared by the Dempster Brothers in 1935. The containers were called Dumpsters, a blending of the company’s name with the word, ‘dump’.

The Dempster Brothers first patented the dumpster in the 1935 in Knoxville, Tennessee. The original dumpster was designed to be used by mechanical arms, but that process wasn’t perfected until the 1950’s. In essence, the Dempster brothers patented the first ever garbage truck called the Dempster Dumpmaster. 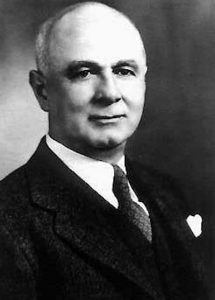 George Roby Dempster used his fame to reach political office in Tennessee. He was the Mayor of Knoxville. Along with his brother, he started the Dempster Brothers Construction Company in the 1920’s. After his retirement, George Dempster became the City Manager, a political position working on the alliance between government and business in building and construction. Consequently, he become a very famous American mayor.

Dempster units are still manufactured today, but only have a small percentage of the market. Currently, models are called “Roll-off” units, but the term Dumpster has stuck.